its not over til its over

A week ago there were a lot of predictions, anxiety, even mild panic about the All Blacks. It was not good enough that they won all four of their pool games, scored 25 tries along the way, conceded 4; picked up a couple of bonus points along the way and cruised into the quarter finals without any serious injury. No, no. The fact that they did not double that number of tries at least and concede zero tries had the fans in a panic.

The question that should have been asked is, to what point? The point is to win and maximise points. The maximum points available in 4 matches was 20. The All Blacks scored 19, four points clear of the second qualifier. More side steps and swerves, more crash banging through opposition to get more tries gets us no higher on the ladder; it has only two possible outcomes: more for opposing teams to analyse, more risk of injury.

Then came the glory. The game everyone was looking for against Namibia and Georgia. But instead it came against France, in Cardiff, in the quarter-final. Now we are simply unbeatable. We have all the stars. Savea and Nonu just run through and over opponents, Millie runs a round them; SBW draws defenders then releases an unmarked supporter into glory. Against all comers we are now, in the fanzone, simply unbeatable. We will take tries at will. We will not just win the Web Ellis, we will humiliate all the old foe in the process. We are already planning the parade.

But beware the distraction of glory for glory’s sake. Have a look at this chess I game I played against 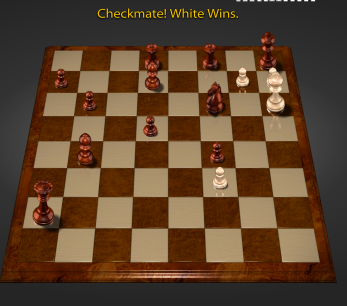 a computer character named Deon. Deon, significantly was playing in Black and Deon is a computer who plays like a machine. Black set about racking up a solid lead in the game but then black’s queen got blood lust. Instead of marshaling his superior numbers and focusing on my king, old Deon decided to humiliate me by taking everyone of my noblemen before finishing off my friendless King. With one very long shot available, I sneaked my King behind two pawns and shuffled quietly up the sideline, like Aragorn with a pair of hobbits sneaking up on Sauron. So while Deon distractedly finished off my remaining noblemen and a few pawns. It gave me just enough time to secure this miraculous checkmate you see above.

A lesson to be learned. It’s not over til its over. So it was that Japan beat South Africa. So it could be that the Boks could beat the AB’s.

You may say that I only created this warning as a cover story to show-off to you about this chess game. You may suggest that, I could not possibly comment, except to say this was one of my finest games against Deon who, in this game, got away on me and I found a way to win against the odds.

And in rugby there is one other consideration that you do not have in chess. A referee. What a difference a referee can make. You may be the better team, but if the referee is ‘making human errors’ and you are on the receiving end of his ‘human errors’, then you are ‘having a bad day’.

And that brings us to the Jocks playing the sheep shaggers last week. In this game the Scots had the game in the bag with a minute to go. The ref made a human error. The Scots lost. They made their feelings about referee human error very clear and Joubert ran like a rabbit.

The point being, we do not have the Webb Ellis Cup yet. Its not over til its over.

Having said all that, there is no way the Saffas can beat us this week; we will smash them and then the Ozzies or Argies after that. Go the All Blacks, we are unbeatable. At least as long as the bookies and World Rugby politicians keep out of it.

This entry was posted on October 15, 2015, 2:27 pm and is filed under 4. Sport, Rugby World Cup. You can follow any responses to this entry through RSS 2.0. You can leave a response, or trackback from your own site.