Posted by tonypcollins in astronomy on January 28, 2016

Having discarded Pluto as a real planet, we now once again have our real Number 9 planet. We cannot see it because it is about 56 billion miles from the sun, where we are a very neighbourly 150 million miles away from the sun. Where we take one year to orbit the 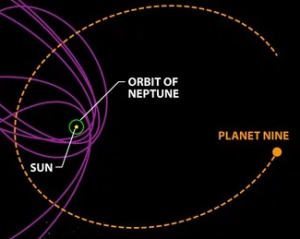 sun, Planet 9 takes a leisurely 10-20,000 years. It’s a long time then since it got anywhere near the sun to possibly be observed by even the most powerful telescope. But two researchers, Mike Brown and Konstantin Batygin, observed the movements of bodies within the Kuiper belt, where Pluto lives, and computer-modelling of the orbits of space bodies convinced them that there is a body about 10 times earth’s mass and 2-4 times our diameter out there inflicting its gravitational pull on these other bodies’ orbits.

The weird flip side to this pattern is that if you add #9 to any other number, the sum of the answer is always the other number, not the nine. So

and on ad infinitum

Not sure what this means but I have a feeling if you work it out you will have solved the secret of the universe.

But why do we care? If Planet 9 is so far away, we will never see it, so what does it matter? Perhaps it matters because we have a quest. We have a curiosity born of intelligence. We want to know what is out there. We want to know who our creator is in the same way that those abandoned children on reality TV shows search out their birth parents. Everyone wants to know: ‘having created us, why have you forsaken us’? Fair enough.

But we, in Dunedin, New Zealand, live on a tiny dot of a planet that floats in a relatively small solar system (our sun is a dwarf sun) which is located in a remote corner of the Milky Way which itself is a remote little galaxy within the incomprehensible universe.

It sort of reminds me of an interesting part of a David Attenborough documentary about the Kalahari desert in Namibia. They filmed down a cave, named Aigamas cave, 60 metres below the desert, in which there is the earth’s largest known underground lake.Down in this lake lives a little fish named the golden catfish.

It grows up to 16 centimetres long. It is an air-breathing fish and as such could move a short distance on land, like an eel. To the golden catfish, this lake of almost 2 hectares is the entire universe. They have no conception of the narrow portal that leads to a completely alien world of the Kalahari desert with its huge night sky above it and the rest of Africa surrounding it.

But imagine if that fish had a genetic desire to search for its DNA relatives beyond its own universe. ‘Why have you forsaken us, oh great Golden Catfish?’ It is, after all, what drives other fish species to travel huge distances back to their birthplace. And, with that drive, the golden catfish explores the edges of its known universe and finds a small underground stream that eventually finds its way to another river or swamp down in the southern rainforests. What a discovery. What a new world with sunlight above it instead of the darkness of its cave. Imagine the change in organisms to feed on, the change in temperature and the new creatures it would meet along the way. But it would not find any more little cave golden catfish; their cave environment has resulted in them evolving as unique to that little universe; and I am not sure they would survive meeting their closest dna relative in African rivers and swamps, the sharp-tooth catfish, which gets to an average length about a metre. But, if they made it to shore and crawled briefly onto land, they would then be confronted with all manner of terrifying flying insects and birds, crawling ants and scorpions; they would hardly comprehend larger animals of hippos or elephants; hyenas or lions; it’s life Jim, but not as we know it. At what point does the catfish wonder why he left the cave.

So why do we get so excited about Planet #9 and beyond? About black holes and space portals. We are far more intelligent and imaginative than a catfish. We have watched the entire Star Wars series as well as Star Trek. We would not just stumble unknowingly into terrifying alien worlds to become nothing but a rather unmemorable snack before lunch. We may believe we are the divinely anointed masters of all beasts of the land and birds of the air, but that franchise is only for this planet. We have no rights beyond our atmosphere.

Similarly in the Aegamas cave the Golden catfish rules all the organisms in its own little universe. But that doesn’t mean much if they come up against a metre long saw-toothed relative who doesn’t feel the same family connection or a scorpion looking for lunch. As a life-form they were created from base organisms just like us. Then they evolved over millions of years to the creature they are now.

If we believe that homo-sapiens evolution has been fast-tracked from primate beasts to become super intelligent species, then we are suggesting that, between us and the primary divine creation of all life from which our forebear primates evolved, there is an alien life-form that re-wired our brains and dna 200,000 years ago to achieve that intelligence. If we find them we should be prepared in case they may not welcome us as children, rather they may say ‘Hey look at our little monkeys, how did they get here?’

But I don’t know why I bother to write this. Fifty percent of my readership would not contemplate space exploration because, at the end of it, zero-gravity golf would just seem silly; the other 50% is of the firm conviction that ruling of the beasts and the birds is solely for the purpose of having them lightly sautéed in a brandy sauce, served with a pear and blue cheese salad and washed down with delightful chilled chablis; the thought of being, in turn, a sautéed lunch for an extra terrestrial is not appealing. So I am fairly confident that neither of my two readers got past the first three lines before disengaging. My words therefore simply go into the ether, just in case ‘they’ are out there and monitoring me: ‘I come in peace’.

Of course the other theory could well be that the sun itself is the 1st heavenly body, not Mercury, in which case, Neptune becomes #9 and the search is over.