Posted by tonypcollins in Politics on March 12, 2018

“I’m off to Cuba on Saturday” said my old mate Chinny; “I’ll send you back a poster of your hero Che Guevara, since you are too feeble

to actually come with me, see Cuba for yourself and get your own poster.”

Harsh words from someone who is supposed to be a mate. Doesn’t he realise I have a golf game on Monday morning? I can’t just take off halfway around the world on a whim. I have responsibilities, I have commitments. Anyway Chinny wanted to know why I wanted a poster of a murdering terrorist. So that started the whole debate between us as to when a murdering terrorist might actually be an heroic freedom fighter removing corruption and greed from the world by whatever means it takes.

The Che Guevara legend came to the fore during the third movie of my favourite ever trilogy, The Godfather. Michael Corleone was in Cuba with all his mafia gangsters, plus a collection of senior USA government and legitimate corporate representatives celebrating the 1959 New Year, as New Year’s Eve party guests of Fulgencio Batista, the Cuban military dictator.

Cuba was full of magnificent art deco hotels and casinos, flashy American cars and all the glam of the USA 1950’s. At least it was glamorous for the gangsters, the big businessmen, corrupt politicians and the American tourists; the peasants lived in poverty. But that was the night that the socialist revolutionary Fidel Castro and his second in command, Che Guevara, took over the government of Cuba. Che Guevara was not a Cuban. His name was not Che. Nor was he just an uneducated, peasant soldier who worked his way up the ranks of Castro’s revolutionary army.

Ernesto Guevara was born into a wealthy Argentinian family (Che is the Hispanic term for an Argentinian) and was of mixed Irish/ Spanish blood; some would say that bloodline made him born to be a revolutionary. He was studying medicine at the University of Buenos Aires when he decided (twice) to take time off from his studies to travel on a motor cycle up through northern Argentina, Peru and Chile. It started as an adventure but the abject poverty, disease and corruption he witnessed turned this adventure into a lifetime mission. He went back to Buenos Aires and finished his medical degree and then set off again through Latin America determined to make the world a better place. He was drawn to socialist organisations and soon became involved in assisting President Arbenz of Guatemala to introduce social reforms into that country.

Unfortunately Arbenz was overthrown, with CIA assistance, and the young Guevara went north to Mexico. In 1955 he married Hilda Accosta, an influential economist who introduced him to Cuban revolutionaries visiting Mexico. It was at this time he met Fidel Castro and he had found his great mission in life. From Mexico Guevara sailed to Cuba. While initially he brought his medical skills to the revolution, such was his political intellect and his unwavering military pragmatism, he soon became Castro’s second in charge. One of the twentieth century’s greatest revolutionary partnerships was born. 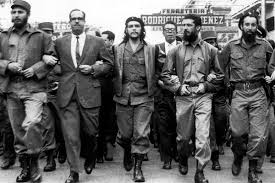 After the success of the Cuban revolution, Che undertook several important government roles in Cuba including agrarian reforms and establishing a nationwide literacy programme. He trained the military forces that repelled the USA’s disastrous invasion at the Bay of Pigs which internationally embarrassed the Americans. He is also reputed to have treated the 2,000 political prisoners without compassion. The death penalty was mandatory.

Immediately after the revolution Che married fellow Cuban revolutionary Aleida March and they had four children together. He became a global statesman, an honoured guest in Russia, China and Africa. But over the next few years he came to be at irreconcilable odds with Castro over 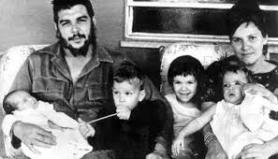 Cuba’s economic policies. As a statesman he had become disillusioned with the Russian socialist model favoured by Castro and far more inclined towards the Chinese model. History would have to say, in retrospect, Guevara was right in his assessment. Cuba’s population/GDP ratio today is almost identical to Greece which is not a great achievement for the Castro rule. Relatively speaking, NZ has under half the population with over twice the GDP. On any social or economic scale, it appears that Cuba is worse off now than it was before Castro took over. Before Castro, Cuba spent 4% of its GDP on education, the same % as USA and higher than anywhere in Europe. Before Castro, Cuba had more doctors per 1,000 population than Great Britain. Ideals are all very well, but if you cant create the wealth, you can’t deliver the social programmes. Castro did change Cuba from being a country with a disproportionate distribution of wealth, but unfortunately converted it to a country of almost universal poverty.

So, disillusioned with Castro’s economic policies, Che Guevara resigned his government posts in 1965. He dropped out of sight for a while but then turned up in the Belgian Congo, supporting the revolution there that eventually renamed that country Zaire. From there he made his way to Bolivia where he took an active role in fighting alongside local revolutionaries. On 8 October 1967 Che and his small band of guerillas, were captured and executed by the Bolivian forces, supported by the USA military. They were buried in secret graves that were not disclosed for 28 years. 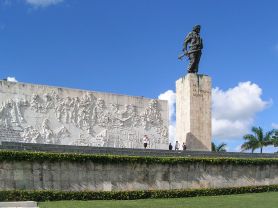 1997, his remains were repatriated from Bolivia to Cuba where they are housed, along with the 29 revolutionaries who died with him, in a huge mausoleum at Santa Clara. Fifty years after his death he remains a folklore legend.

Nelson Mandella was a contemporary revolutionary of Guevara. Mandela was born to the Thembu royal family in South Africa. Like Guevara he was university educated. As a lawyer he became involved in anti-colonial politics joining the ANC in 1943, committed to the overthrow of apartheid. He was also a Marxist and a member of the South African Communist Party. In 1961, in association with the SACP he co-founded the militant group “Umkhonto we Sizwe” and led a sabotage campaign against the government. He was arrested and imprisoned, not an unfamiliar experience, but this time it was for 27 years. He was released in 1990 after years of international protest and sanctions against South Africa’s apartheid policies. Through surviving, Mandella became the poster boy for the victory over apartheid. The first democratic elections in 1994, when black South Africans were given the vote, saw Mandella become President of South Africa. Although a marxist by history, Mandella maintained the established liberal economy in South Africa. The collapse of USSR communism in 1991 and the economic changes in communist China clearly influenced his economic direction. He died peacefully of old age in 2013. Mandella may be said to have been a revolutionary, but in reality he was a protester whose greatest achievement was surviving 27 years in prison until the political landscape changed. The difference between protester and revolutionary is the difference in lives between Mandella and Guevara. One buried in prison for 27 years, the other buried in an unmarked grave for 28 years. Now both have grand memorials to deliver messages to the world.

Bin Laden may have been the closest we have seen of a modern day Che Guevara. Bin Laden, born into a wealthy Saudi family, travelled to Afghanistan to join the guerilla fighters to drive out the Russian invaders. A noble cause. A brave and intelligent fighter. A leader of men. But Bin Laden crossed the line. Bin Laden targeted non-combatant civilians in his war against the West. He may have claimed justification in his actions by citing the indiscriminate drone attacks of the USA on Arab targets, but if he wanted to be respected as is Guevara, he had to hold the high moral ground. He needed to discipline himself and his followers to restrict his fight to the soldiers and the spies; to those who invaded Afghanistan and involved themselves in the affairs of another sovereign nation. He had to let the West be exposed as the side that was indiscriminately murdering civilians, if that is what was happening. Through undertaking revenge of the innocents against other innocents, Bin laden has caused the creation of the new, oppressive global ‘security’ industry. Bin Laden has single handedly given governments in the West the legitimacy to spy on its citizens, to arrest and torture suspects and disrupt our travel movements.

Undoubtedly that was his intent. Creating fear amongst the enemy soldiers is the role of a guerilla freedom fighter. Creating terror amongst the non-combatants is criminal terrorism. Guevara may well have killed his political enemies without mercy, but it was war and they were active participants in that war. And Guevara died in battle, fighting to the end, taking his socialist war to wherever in the world he believed it was needed. Bin Laden died while in hiding in a hovel from the Americans. Now, 50 years after his death, Che Guevara’s legend as a freedom fighter lives strong. What Bin Laden’s personal legacy will be in 44 years remains to be seen. But so far there is no grand memorial built to his memory. 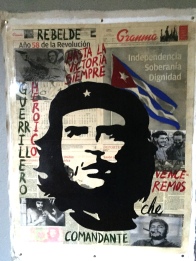 The book writers and screen writers, the poets and the songwriters may disagree whether Che Guevara was executed as a terrorist criminal or martyred as a fighter for justice and humanity. I won’t enter the debate here but if, thirty years after your death, your body is repatriated and honoured with such a massive mausoleum, then history respects you and honours you for doing something important and meaningful with your life. I would love to have gone to Cuba with Chinny on Saturday, specifically to Santa Clara. If only I didn’t have that golf game booked in.

Footnote: True to his word, this poster arrived in the mail from Chinny.

Footnote #2: 8/8/2018: I got an email from Chinny last night asking if a postcard he had also sent me had arrived. I responded in the negative and, being over four months ago, I wasn’t holding out any hope now. Then today this postcard appeared in my letter box. Unbelievable. After 20 weeks it was arriving in my box at exactly the same time Chinny suddenly remembered  that he had sent it. Probably just a weird coincidence, nothing to do with Che himself sending me a message, naah.