Posted by tonypcollins in earth population, Greenpeace, The Greens on January 29, 2015

A bit before the 2014 General Election I had a Greenpeace fundraiser knock on my door. Pleasant enough young lady who had flown in from Canada to warn me about the devious way my government had conspired to expose me to the risks of deep-sea oil drilling off the south island coast. A nice but not a memorable graphic presentation on a smart new IPad apparently explained why I should be demanding the Government choose the alternative of wind power development rather than drilling for oil which would quite possibly destroy life as we know it.

Perhaps, being from Canada, she was not up with the fact that New Zealand, like many other countries, has been investing in wind-power generation for a few years now. Wind power supplements hydro-sourced energy but is not seen in the forseeable future as being viably able to replace the need for oil as an energy source. Even if petrol vehicles were all banned and electric cars, trucks, ships and buses made mandatory, we are acutely aware that such battery powered technology also comes with its own environmental price tag due to the need for mining of rare earth elements. Ironically the smart new I pad that she was using to prick my conscience had its own human rights price tag being reliant on the ongoing slave labour in the Democratic Republic of Congo to mine 60% of the world’s cobalt, essential for powering that i-pad’s battery. But that is another story for another time.

I also concluded that the Greenpeace lady thought that the proposed oil exploration off the south island coast was intended only for NZ’s own energy needs since she proposed to me that wind farms built by our Government would replace the need for off shore oil drilling. Not so. Even now, crude oil is NZ’s fourth largest export commodity. If we found more oil, this oil would be for exporting. But aside from that, looking at the alternatives as a global rather than local issue, by promoting wind turbines as  an alternative to oil energy, this GreenPeace representative is effectively promoting exploration for rare earth elements, such as Neodymium for magnets and cobalt for batteries, as a preference to exploring for oil.

Neodymium is the rare earth element that is essential in the manufacture of the powerful electro-magnets for the wind turbines.

The lake of toxic waste at Baotou, China, which has been dumped by the rare earth element processing plants in the background

All of the stages of mining, refining and disposal come with unique issues. Most rare earth elements are mined through open pit mining, which involves heavy equipment and machinery. This disruption on the surface of the earth disrupts ecosystems.

Furthermore, mines are the point source of release for very serious contaminants. Rare earth elements contain radionuclides (radioactive isotypes), Once radionuclides are in an ecosystem, they accumulate in plants, where the higher concentrations are ingested and ascend the levels of the food chain (Paul & Campbell, 2011). Radioactive contamination has become such a problem that monazite mining has now been banned by China.

The other major contaminant is dust and metal. When mining operations break up materials, the dust can release a variety of heavy metals commonly associated with health problems. As dust, these minerals (such as the asbestos-like mineral riebeckite) can be absorbed into lung tissue, causing problems like pneumoconiosis and silicosis, commonly known as “Black Lung” (Paul & Campbell, 2011). Another example of harmful dust generated is flue dust, a byproduct of mining fluorine. According to the Chinese Society of Rare Earths, every ton of rare earth elements produced generates 8.5 kilograms of fluorine and 13 kilograms of flue dust, waste materials which contain the heavy metals discussed above (Schuler et al, 2011).

The goal of mining is to end up with a mostly pure and usable element that can be utilised in whatever way necessary. However, the ores that are extracted from the earth do not come out pure, instead they need to undergo a refining process. This refining process introduces another set of environmental concerns, mostly revolving around the release of metal byproducts into the environment. It is very easy for metals to enter the air, ground or waters in an environment, and once there it is nearly impossible to remove them.

The metals in an environment can also prove devastating to organisms. The byproduct of mining rare earth elements is usually waste that is full of further threats to the environment. Generally, waste is categorised into two different types: tailings and waste rock stockpiles. It is the tailings that are of particular concern as they are full of small, fine particles that can be absorbed into the water and ground surrounding a particular mine. Regardless of whether a contaminant is deemed tailings or waste rock stockpiles,the contamination of the water is the main concern. Water can be contaminated in three ways: sedimentation, acid drainage and metals deposition, and once contaminated is difficult to restore to its original quality.

While most of the Neodymium is currently mined in China, it is readily available elsewhere on the planet and very possibly available in economic quantities in New Zealand. Areas in New Zealand that have been identified as possibly containing mineable quantities of rare earth elements are in Northwest Nelson, Westland, Fiordland, and Rakiura/Stewart Island. Fortunately many of these places are off-limits to such mining under schedule 4 of the Crown Minerals Act 1991 (when, incidentally, the National Government held 70% of the seats in Parliament) or because they are in World Heritage areas.

However Greenpeace, in spite of these environmental issues, are asking for my financial support to pressurise the Government to explore this wind-turbine industry as their alternative to oil exploration.

The Greenpeace young lady then presented me with a very legal-looking direct debit form that apparently gave GreenPeace the right to dip into my bank account every month and extract the agreed amount to help them put this pressure on the government to cease and desist from oil as an energy source and invest instead in the business of wind turbines.

When I raised my concerns over the problems in extracting Neodymium I was surprised to be told by the young Canadian lady that she had absolutely no knowledge that there even was such a problem. I don’t think she even knew what Neodymium was. Given that she also did not even seem to realise that wind-farms were already existing and expanding rapidly in NZ, it was a little alarming that a front-of-house representative of Greenpeace, sent all the way from Canada, on a jet plane which would have consumed around 200,000 litres of jetful each way, to inform me about the benefits of wind turbine energy, knew so little about them. There ended that discussion. So, short story even shorter, she didn’t get my signature on the direct debit form.

That however did not discourage Greenpeace from a follow up attempt at getting access into my bank account to help halt this oil exploration, this time from an English-accented young lady.  I tried the amicable fob-off: “haven’t you got big enough environmental issues closer to England?” (I don’t look for confrontation, but there seems to have been a lot of oil drilling underway in the seas around Europe), but she insisted she was actually calling from Auckland, as if that made any difference, as if flying halfway around the world to make a phone call was something with which Greenpeace were ecologically comfortable. She really did want me to contribute to the Greenpeace funding campaign.

I explained that I know full-well that oil drilling companies are primarily interested in profits and I have no doubt they are negotiating with a Government that is equally keen on making our country a profitable economic entity, and yes I am aware what happened in the Gulf of Mexico in 2010, and have some idea of the risks of a worst case scenario in NZ. I assured her that if there was a viable alternative I would endorse it but so, I believed, would the corporates and Governments which are also very averse to risk taking. The corporates for the impact on their profits, the governments for the impact on their next election.

But the massive and growing demand for energy sources including oil, wind, solar, hydro, gas, coal and nuclear means that we still need to keep sourcing new deposits of oil in addition to developing alternatives if the rapidly growing world population is to be fed, provided with homes and hospitals, schools and libraries, offices and factories and with a transport infrastructure to connect everything.

And frighteningly the earth’s population grows exponentially. While it took over 150,000 years for the earth’s human population to reach its first billion, it took only another 150 years to reach its second billion and now, in less than a further 100 years, it is moving quickly towards eight billion. How quickly we pass ten billion depends on what happens in this current generation. I am not surprised if the earth is complaining loudly. 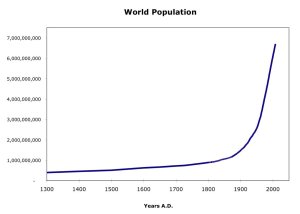 So I pointed out that increased drilling for oil with the consequential increase in CO2 levels in our atmosphere is actually a symptom of our problem, not the problem itself.

The core problem is that our population is rapidly expanding out of control. If GreenPeace were somehow successful in significantly reducing oil drilling then that would be a solution of sorts, but only because it would lead to global economic collapse, massive unemployment, starvation, disease and would put the human species on the path back to the stone age and possibly beyond.

I wondered aloud whether the Greenpeace organisation might wish to focus its resources on humanely resolving the crisis of over-population as a means of reducing the human impact on the environment rather than asking me for money to travel around the world fundraising and sailing protest banners to oil rigs. For if we do not resolve the population explosion problem then, sooner or later, mother nature will develop a really unbeatable virus and do the job for us.

A pause and then an exasperated young English lady told me that she was just wasting her time with me and so she hung up.

I guess you can’t travel to New Zealand and Australia on Greenpeace donations if you are only coming to tell us about birth control. The dire threat of off shore drilling is a much easier sell.