Sapiens on the move again

Posted by tonypcollins in 3. Religion, Mars, Sapiens migration on September 10, 2015

In the early 50 or 60,000 years BC of sapiens’ migratory patterns, they were brave and ambitious. Hunting and foraging into the great unknown. Whether forced by local conflicts, climatic changes, excessive foraging and hunting or whether just inspired by an immense sense of adventure, sapiens migrated or fled from Africa westwards through Europe and eastwards through Asia, south to eventually reach New Guinea and Australia and North through Siberia before travelling down through Alaska and North America all the way to the steaming jungles of South America. In addition, the Polynesian sapiens ventured out onto the oceans in little more than dugout logs with a sail attached, to eventually colonise Hawaii, Tonga, Samoa, Fiji, Tahiti and New Zealand.

These were people who travelled into the unknown, relying entirely on their own hunting and foraging skills for survival. Travelling from the Northern Africa and the Mediterranean up through the frozen wastelands of Siberia then down through Alaska must have been enormously daunting; and hunting the giant mammoths for survival equally daunting. Of course it happened progressively over hundreds of generations. Sapiens had reached North America by 10,000 bc probably having started the migration some 40,000 years prior. 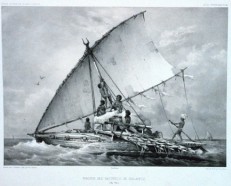 No less so was setting off in canoes across terrifying oceans in search of what? a speck of land that they had to arrive at by chance in order to survive.

The sapiens instinct when they are forced by circumstance to abandon their homeland, has always been to travel to empty land and setup a new culture. Even to some extent this was apparent with the European migration to Australia after WW2. They came with nothing to a very sparsely populated land with precious little social welfare and built a life for themselves. But in the 21st century it seems different. Or more specifically in September 2015 it has instantly become different. Such is the power of social media today.

Turkish policeman recovers the body of a 3 year old refugee

First group of Syrians being relocated to Germany.

This response to the Syrian refugee problem marks a significant shift in sapiens attitude towards mass numbers of displaced people. But once the social response level has been reset, the 6 million displaced Afghans and Iraqis are next in the queue. And then hundreds of thousands of economic refugees will be filling the boats along the South East Asian coast. Impending death through warfare or through economic collapse, resulting in starvation/ dehydration/ lack of medicine, is only academic. The human tragedy is the same. The precedent has been set by the global response to the image of a Turkish policeman with a dead Syrian infant. The major difference between this displacement and historical sapiens displacement through the previous 70,000 years is that now they do not go into the wilderness; they head for the brightest lights. They see what the wealthy countries have and say they want a bit of that.

But is that a species solution? Many of the twentieth century problems have largely been created by urbanisation and the condensing of too many people into too small an area. Urbanisation has also brought with it massive global population growth. So is adding 800,000 Syrians into Germany a solution that will benefit mankind as a species?

But you may say there are no great unknowns to explore any more. Or none that are accessible. Would Australia allow a new tribe from Syria to establish an independent state in the central Australian desert? Would the USA allow an indendent Afghan state to establish in the Alaskan wilderness? Hardly likely. Not even declaring such states as United Nations sanctuary states would work. So, meantime, they head to Germany and England and we throw another chair on the fire.

But to you who think that we have come to end of the great Sapiens migrations into the uninhabited wilderness let me use the four letter word: Mars

Its official, Obama announced it in February this year and NASA are all geared up for it. In the next decade we will have men on Mars. By 2035, that’s only 20 years away, we will have humans living permanently on Mars. Possibly up to 50,000 humans; that’s the population of Timaru.

But isn’t Mars just a planet of red dust? The atmosphere cannot support human life? At the moment yes, but apparently not an insurmountable obstacle. At least according to some guy on national radio, and you cannot get better authentication than that, who explained that while Mars actually has a very thin atmosphere, its does have an abundance of frozen water and frozen carbon dioxide. It just needs warming up a bit and it will be very habitable for mankind. And if modern humans have developed any skill-set we can lay claim to, it is the ability to warm up a planet. He thought the warming up would be done with the aid of giant mirrors and that, eventually, Mars would have lakes, oceans and vegetation and could accommodate millions of humans. What is certain is that the powers that be are determined to achieve it as a start point to finding somewhere else to live in case the worst happens down here.

So what will we use Mars for? In the testing stage will we use it as a 21st century version of 18th century Australia? Just a far off place to offload all the surplus/ unwanted population from the prisons and refugee camps? Out of sight, out of mind. Perfect guinea pigs.

But once they have established a level of civilisation on Mars, will the corporate tsars then decide to inhabit this planet? Establishing estates with a backyard the size of Bolivia? The equivalent of a 20th century Australian owning rights to millions of square kilometres of mines and living in a luxury home overlooking Sydney harbour.

Synthetic Humans for sale or hire

No doubt they will have their robots in play by that time for their domestic staff and the more strategically critical tasks. The population of descendants from the Martian convict colony (known as the MCC) will be the new age African slaves, toiling in the fields and mines. Work you just would not give to an expensive robot. But only robots will be allowed up in the big house. Robots certainly will be far more reliable than humans in tending to the whims and homes of the Mars set. They will nanny the children and pour the drinks which means at least the g&t set will, for the first time ever, be confident that no-one pissed in their drink before serving it.

So who do you think might be already jockeying for a home on Mars? Elon Musk’s Spacex is probably at the front of the queue. Richard Branson is also building his own spacecraft and Donald Trump is investing in the Presidency of the USA knowing that NASA reports directly to the President. As you know I am not one to indulge in conspiracy theories, just sayin’ is all.

Sapiens, they just can’t sit still for one eon.